skip to main | skip to sidebar

well, it's been about a month since maineahrtist's last posting. General petraeus has left town...iran's president as well...i'm killing some time here in Blue Hill Library while i download some film forum podcasts. Planning a trip to Manhattan in two weeks...running low on the stuff that dreams are made of...ie: the weakening us dollar. (once i get my studio in the woods built, i'm headed to Italy to get me some of those increasingly more valuable Euros. Fall in Maine: the moon last night accented by the warmth in the air. quite nice. glc
Posted by George Crosby at 9/26/2007 11:16:00 AM No comments:

i've been absent w/out leave from this spot for many weeks. apologies all around; i've had to make a buck, pay my debts and tend to my art biz. However, as i noodle away at my painting and deal w/ the masses here in ptown, i've been struck by the reluctance to state the obvious: the prez is naked! today's news illustrates the old saw about shooting the messenger .. (in this case, quite literally, as one of the soldiers from the 82nd airborne, subsequent to his disclosures, was shot in the head)..we...yes we you/me...WE are an army of occupation!Out of Iraq!...meanwhile sleazeball Las Vegas luminary Sheldon Adelson is funding Ari Fleisher's 11million dollar ad campaign to shore up (that's a laugh).. american opinion...Freedom's Watch my ass! OBSCENE!
Posted by George Crosby at 8/24/2007 10:37:00 AM 1 comment:

outside Doma in west village: opening of my coney island painting show 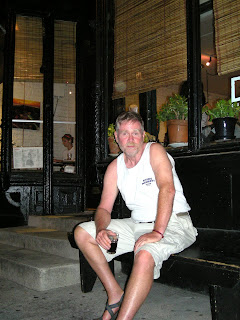 having reluctantly left the exquisite warmth of late april in key west; i've returned to my cabin in Blue Hill, Maine. As we descended from 36,000 ft. to Bangor , Maine, the clouds enveloped and the cold rain surrounded. But, the lightly trafficked airport was a breeze to traverse and my friend Bruce was there on time to meet me for the drive to Blue Hill. Been here three days and i'm just able now to appreciate the contrasts between maine and the keys. I've timed my return well. The croci and daffodils are in bloom...the bald eagles are wheeling overhead and the sun has come out after a very wet april.I head for nyc, ny in two weeks....i plan to paint/ exhibit in SOHO (corner of w. broadway/prince) for the 2nd half of may...then head up to Provincetown, Ma., for the inaugural season of a friend's 80ft. wooden schooner. It's called the Hindu and last year at this time i was rainsoaked most days, working on the schooner's refitting down in Boothbay Harbor. I haven't seen the boat since it left it's boatyard and i'm looking forward to painting her in action. She's docked at the end of Macmillan wharf, next to the Widah museum. Then back to more street painting in nyc and a show of my paintings at DOMA cafe @ waverly/perry st.'s in the west village. plan to show paintings of coney island from twenty years ago.
Posted by George Crosby at 5/02/2007 02:45:00 PM No comments:

i was born in new york city, 58 years ago. Watching a program on PBS last night, about chimpanzees....40 years of age is long in the tooth for our cousins...@ 58 i've got my health...and more importantly....an optimism that nevertheless, reflects the ironic paradoxes of longevity. The program on chimpanzees was sobering and at times quite inspirational....hope in knowledge and honesty....and the willingness to grow. As i awoke this am...i was struck by the irony of optimism...last night's uplifting and cautionary glimpse into the REALITY of our relationship w/ our near relations....when i returned to that pbs station, this am...."curious george" , a children's cartoon show....had the protagonist being outfitted w/ a mini protective beekeeper's suit?!!!!! the same forum for correcting our misguided behavior....was inculcating the same wrongheaded beliefs.....in children! and on it goes....
Posted by George Crosby at 4/06/2007 05:43:00 AM No comments:

run up to april fool's day

any takers for fool of the year....decade ...century.?..hey whatever...the jokes on us....as trade wars/ and hot wars are threatened..we here in the us come to grips w/ the discovery that there's a greater world out there...w/ consequences for every mistep taken....peace...it works wonders
Posted by George Crosby at 3/31/2007 09:28:00 AM No comments: 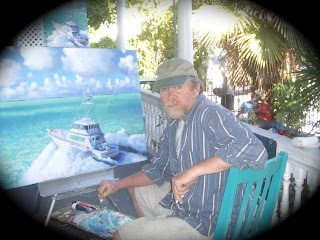 when i left blue hill maine on january 21st...the ride to the airport in bangor was a snowy blurrrrr....a few hours later i was in key west, florida. Been here since, painting and helping run an art gallery: The Real Key West. Seasons change and i'm already planning my return to Blue Hill at the end of April....I'm in the gallery (located @ 525 Caroline St. (next to the Curry Mansion and a block from the Bull) I've a lot of figurative paintings....scenes of key west, for the most part. Hope you'll stop by. george
Posted by George Crosby at 3/27/2007 01:22:00 PM 1 comment:

George Crosby
I've studied art @ The Univ. of Michigan, Ann Arbor and The Cooper Union in New York City, w/ additional studies @ San Carlos Academy in Mexico City and privately, in Nately w/ Henry Hensche and Edward Laning. I've traveled the world and worked in locations as varied as Tokyo and New York City. Presently, I'm exhibiting in Maine, Florida and New York. I'll be in Key West until late April, when I fly home to Blue Hill, Maine. About mid-May, I head for New York to prepare a summer show @ Doma Cafe on Perry and Waverly in the West Village....then one more side trip to Provincetown,Ma. where I've also been exhibiting for over 30 years...(look for me on Macmillan Wharf painting the recently refurbished 80ft. wooden schooner, The Hindu. Finally, home to Maine to work on my studio building. Hope to hear from you!